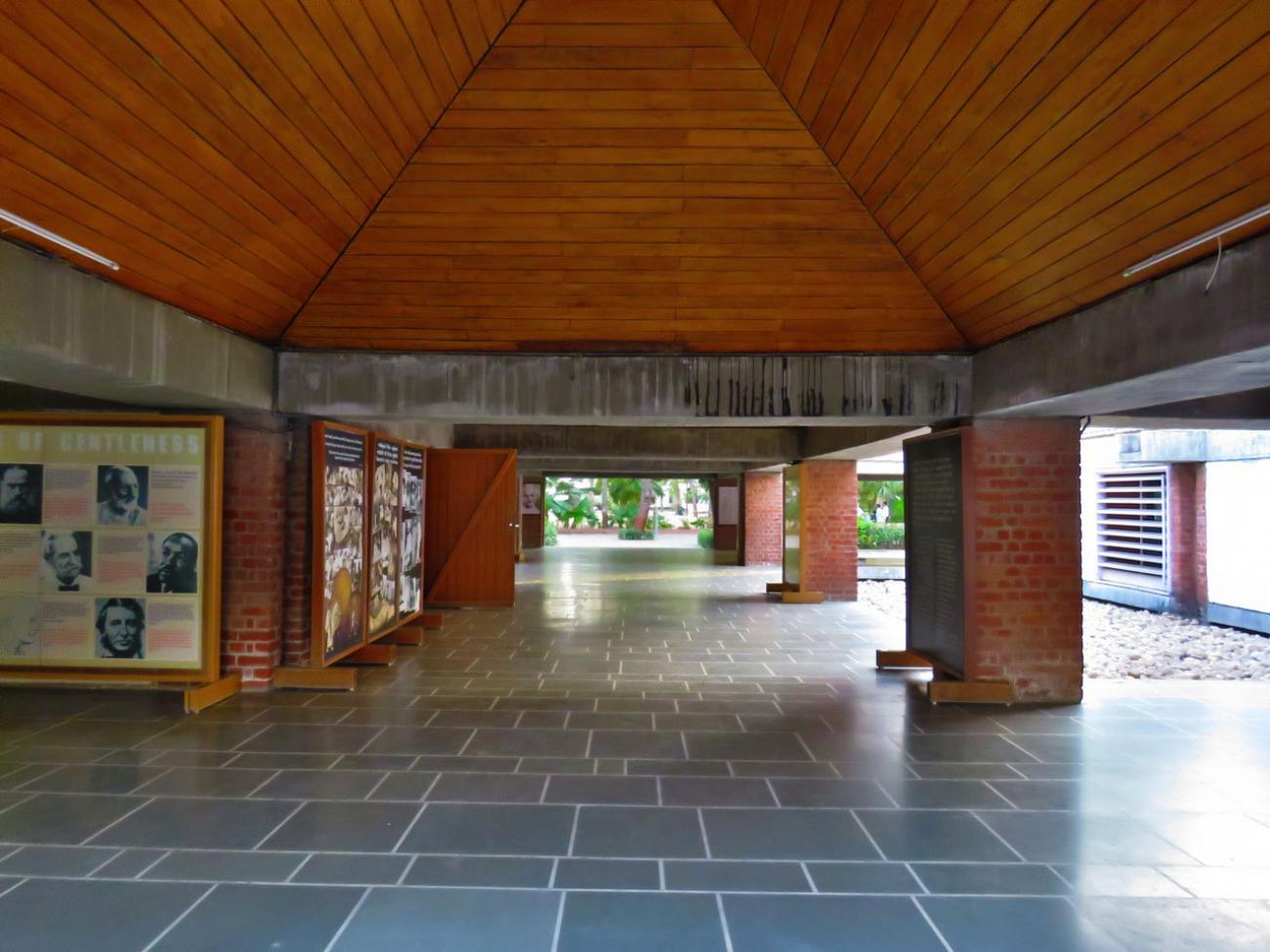 This memorial museum is located in the ashram where the Mahatma lived from 1917 to 1930. Housing his books, letters and photographs, this modest and humanly scaled memorial uses brick piers, stone floors and tiled roofs to find a contemporary expression for the spirit of swadeshi.

The museum uses a simple but delicately detailed post and beam structure. Load bearing brick columns support concrete channels, which also support the wooden roof. The foundation is made of concrete and is raised about a foot from the ground.

The commission was the architect’s first important work in private practice. In order to reflect the simplicity of Gandhi’s life and the incremental nature of a living institution the architect used modular units 6 metres x 6 metres of reinforced cement concrete connecting spaces, both open and covered, allowing for eventual expansion.

The modular simplicity of the structure is continued in the use of basic materials: stone floors, brick walls, wooden doors and louvred windows devoid of glass, and riled roofs. The units are grouped in a consciously asymmetric manner to be analogous to the Indian village with its pathways and seem­ ingly randomly placed buildings and its meeting points; in this instance the central water court.

The initial construction con­sisted of 51 modular units. Some of the units are enclosed by walls; the exhibition spaces so created counterpointed by areas for rest where the visitor can sit … Since its inaguration by Jawaharlal Nehru in 1963 the units have been added to, extending the existing pattern.

In this work Correa demonstrates the uncompromising execution of an idea as a powerful statement of form, an approach found in many of his works such as the ECIL Office Complex and the later Kanchanjunga apartments – where single overriding con­cepts become the major organising element of the architecture.

The materials used in the construction are similar to those in the other buildings in the Ashram: tiled roofs, brick walls, stone floors and wooden doors. The only addition is the concrete channel that acts as beam and rainfall conduit, and which permits expansion for additional construction to be addded in future. No glass windows were used anywhere in the building (in deference to Gandhi’s rejection of modern industrialized products), light and ventilation being provided by operavle wooden louvers.

These elements combine to form basic modular units of 6×6 m, in a typology analogous to the villages so central to Gandhi’s thinking. They are grouped in a casual meanderiing pattern, creating a pathway along which the visitor progresses towards the centrally situated water court (refreshing in the dry heat of Ahmedabad). Some of the units are enclosed by walls; the various display-cum-study places so created being counterpointed by areas of visual rest where the visitor can meditate. This configuration generates a wide spectrum of conditions, varying all the way from closed-box to open-to-thesky, the modifications from one zone to another along the spectrum being signalled by subtle and almost imperceptible changes in light and air movement.

Because the collection will, by its very nature, be added to in time the Sangraha­laya is a living structure which can grow and modulate. Recently, more units were added, extending the pattern. This pro­cess will continue as more photographs, letters and other documents are col­ lected, each generation of young Indians making its contribution and paying its homage to the Mahatma.

Blog
There is Rapid rise in Green Airports in India Now !

With the Growing Infrastructure and raising awareness about green buildings, there is…

Blog Building Materials
To choose which is better between Cement brick & clay brick ?

2
0
Login to your Account
Register in Econaur
X
X