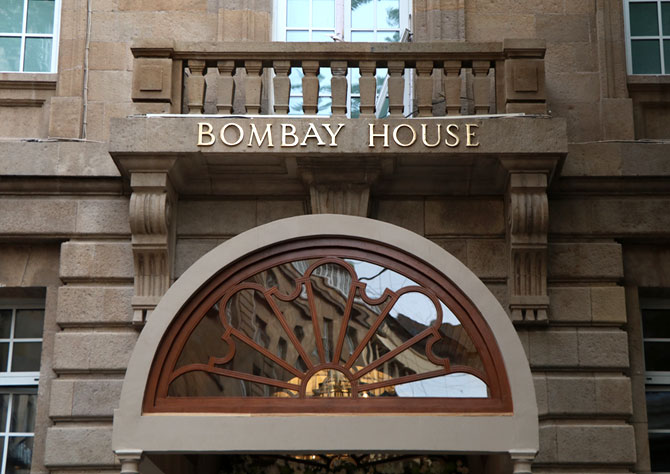 In this week’s Monday Flashback we feature the Flashback Sustainable Story of Bombay House, Bombay House is a historic privately owned building in Fort, Mumbai, India that serves as the head office of the Tata Group.

Situated near Flora Fountain, it was completed in 1924 and has been the Tata Group’s headquarters ever since. The building is a four-story colonial structure built with Malad stone and was designed by Scottish architect George Wittet, who designed over 40 buildings for the group and later became the head of Tata Engineering Company Limited, now Tata Motors.

The building houses the office of chairman and all top directors of Tata Sons, the holding company. Core companies of the group-Tata Motors, Tata Steel, Tata Chemicals, Tata Power, Tata Industries, Tata airlines, and Trent-operate out of the Bombay House.

Bombay House — located on Homi Modi Street ((after the noted industrialist and banker associated with the Tatas) in Fort — was built on the two plots of land bought by Sir Dorabji Tata, the group’s second Chairman and Jamsetji Tata’s elder son, from the Bombay Municipality in 1920. The building was designed by the well-known architect, George Wittet, who was also the architect of the Gateway of India, the Prince of Wales Museum (now called Chhatrapati Shivaji Maharaj Vastu Sangrahalaya) and other iconic buildings of Mumbai.

The overhaul of the Bombay House office was led by architect and urban conservationist Brinda Somaya, of Somaya and Kalappa Consultants. In March 2014, it became the first heritage structure in the country to get a gold rating as a green, environmentally friendly building, awarded by the Indian Green Building Council (IGBC), the Indian chapter of the US Green Building Council.1/4

The staircase at Bombay House, Mumbai

Inside the Renovated and Hi-Tech Bombay House

The ground floor of Bombay House has been converted into a shared space housing an in-house coffee lounge, informal breakout places, and the Tata Experience Centre (TXC). TXC, a digital museum, is aimed at giving visitors an immersive experience into the world of Tata using digital technologies for effective storytelling. In a first for Bombay House, a kennel has been created for the canine friends who have been an integral part of the building for decades. The four floors of the building house offices of major Tata organizations. The historic boardroom on the fourth floor has been restored to its original beauty with only technology being a new addition.

The new technology set up in the building has been designed to create digital workplaces with seamless integration. Each floor has digital meeting rooms with immersive technology to enable seamless collaboration. A custom-made app has been developed to bring together all the technology controls through an intuitive and simple interface. The four-story Bombay House is owned by The Associated Building Company, part of the Tata Group.

The project was implemented with the support of occupants of the building, The Associated Building Company Limited (ABCL), a Tata group company, responsible for the building, and Eco first Services, the sustainability arm of Tata Consulting Engineers Limited, which works in the area of building retro-commissioning and facilitation.

A recent question posed by our user — is a brick building…

0
0
Login to your Account
Register in Econaur
X
X